A: Spontaneous potentials generated by a smooth muscle (circular & longitudinal) preparation obtained from a small segment of guinea pig intestine. The preparation was placed on a MED probe (MED-P545A, 450μm inter-polar distance) and held down using nylon mesh and slice anchor (as typically done with brain slices). 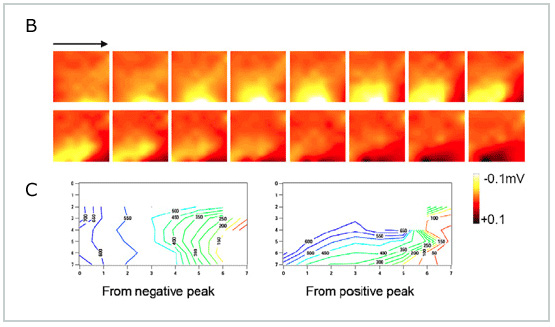 B: This series of frames illustrates the spread of pacemaker activity seen along circular muscle in the presence of 1μM Nifedipine and 250nM TTX. The voltages recorded at each electrode are pseudo-color coded (scale at right) and oriented as shown in the first panel. The frames were taken 50msec apart, and are displayed temporally from left to right for the top, and then the bottom rows. As shown, the peak negative potentials (yellow) spread along the orientation of the circular muscle (left to right), which was preferentially oriented to be in closest contact with the electrode array.

C: Latency maps of the peak negative potentials (left graph) and positive potentials (right graph) also illustrate the phase differences observed in spontaneous pacemaker activity. The phase map of the negative peak is, as shown in a, consistent with the spread of pacemaker activity along the direction in which the circular muscle is oriented. The map of the positive peak is consistent with this, but also suggests spread along the direction (bottom to top) of the longitudinal muscle.